SICKLE CELL CRISIS IN A PANDEMIC - MY SISTER'S EXPERIENCE 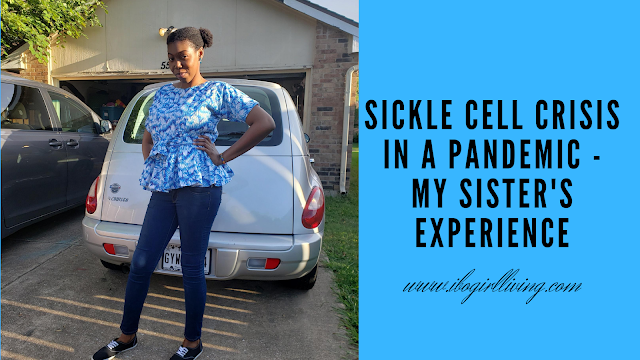 The worst thing that could happen in these Coronavirus times to anyone living with sickle cell disease is to suffer a crisis serious enough that necessitates going to the hospital.
Firstly, a patient will have to go in without any family support but understandably so and secondly if the crisis is severe enough, then the E.R is where one would need to go. You would think that this would make a difference and that treatment would be swift but far from it, at least not in my sister's case this time around.
Up until 2 weeks ago, my sister had been crisis-free, going to the hospital only for her routine blood exchange and follow-up treatments. The worst happened when she out of nowhere started getting pains in her lower back and abdomen that at first seemed mild and when taking her usual pain meds did not do enough, we knew it was serious when she started throwing up and the pain became unbearable. We had to drive her to the Emergency Room as recommended by her nurse and as expected we could not go in with her or assist her beyond the check-in point and so were left with communicating with her by phone (messaging back and forth because she was in too much pain to talk). She could not see a doctor until almost an hour after she arrived but once she informed us that she had been given a room, we believed all would soon be well and that she would be getting the treatment she needed. It was not until my mom got a call at 1.30 am from one of the nurses who was insisting (rather rudely I might add) that she had been attended to, was discharged and needed to leave the hospital that panic set in. Naturally confused and demanding to know what was going on, my mom calls my sister after not getting an update on her well-being from the caller.
It turns out that because she was so dehydrated from all of the throwing up, it was difficult to find a vein to give her fluids and when one was eventually found and fluid was dispensed, it ended up stopping because her blood had coagulated. She was disconnected from the half a bag that she was able to receive but nobody bothered to try again to make sure she stayed hydrated. She was still in a lot of pain and by now also extremely dizzy from not being able to eat but it just appeared like the head nurse and the doctor who came in to observe her did not care. They kept on insisting that she leave the hospital, rudely kept telling her that she should know that nobody stays in the E.R longer than 6 hours and to walk by herself across the building to the pharmacy to pick up her prescribed medication. Her health or safety seemed of little importance but she was able to demand for meds and something to eat to manage her dizziness before having to take an Uber at 4am to her boyfriend's home where my mom picked her up much later in the day. We learned that her sodium levels were low among a host of other things that her sickle cell nurse was able to gather from the little bit of blood that was drawn from her and strongly recommends coming in again to the hospital for more comprehensive tests to be carried out.
It is unfortunate that she was forced to manage her pain at home without fully understanding what caused or triggered the crisis until she called her personal nurse to narrate her ordeal. While I understand that medical staff are probably overwhelmed with Covid-19 cases, it is no excuse to show a lack of concern for a patient's obvious pain, well-being and safety. I have chosen not to mention what hospital it was that did this because this is usually not the norm.
I hope that nobody else has gone through anything similar because this was really an unpleasant experience for everyone. Just thought I'd share and hope that all warriors and their families are staying safe and protected in these times.
xxx
Ibogirl
sickle cell issues